We have four new books in the Catrìona series for pre-school and early years. Ist and Faigh Iasg Dhòmhsa are based on the topics food and shopping. Then we have Spòrs le Sgudal and Gluasad Gleusta which are based on building as an industry. There are packs of support materials to accompany the books and soon you will receive cd-roms on which there will be audio versions of the books and further activities.

Teachers’ notes for these are available below.

The Catrìona Bag contains a range of materials, artefacts and activities to help teachers and other adults in delivering the Early Years curriculum in Scotland. These are the basic components within the Catrìona Bag: 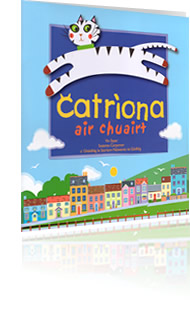 All the work supported by Catrìona is based around the character of one inquisitive young cat and her fondness for visiting her friends and neighbours. Luckily they all live in one long street, Sràid a’ Chnuic, in houses which differ in height, width, colour and shape; the number of windows varies as does their design and also the design of the front doors. Both exterior and interior views are intended to stimulate discussion and comparison since the inhabitants, too, vary according to age, gender, ethnicity and occupation. The picture book is a suitable size for reading aloud, and for sharing with a small group.

Language patterns are very important in Catrìona air Chuairt. The pattern of house number, greeting, an offer of breakfast and Catrìona’s response: Cha ghabh, tapadh leat (no thank you) is the same on each of Catrìona’s visits except the last, where she doesn’t have time to respond, so eager is she to escape from Calum, the vet’s large and enthusiastic dog! The pattern of counting forwards, established at house number 1, is reversed when Catrìona begins her flight homewards.

For more information on this resource, please contact our office.